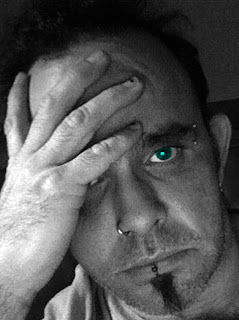 Thanks for everyone that came out and saw us in Addison and Arlington, TX as well as Oklahoma City, OK We had a great time and enjoyed meeting new people. We'll have some pic's up soon from those shows so check our site often.

So....I was at Baker's St. Bar in OKC waiting to get a drink from my buddy Rosco when the "American Spirit" women sitting next to me waited about two minutes before she spat out the words "So what's your deal" I was floored. I've never had someone strike up a conversation with me using that opening line. She was referring to all my piercings, eyeliner and fingernail polish. She then said "you must be in the band" all I could say was; you think? I ended up talking to her for about 20 minutes. She was super cool.

Over the past year I've met a few girls two of which are sisters and I talk to them all the time. Well this weekend their mom came out to see us. She to is awesome! At the end of the night we were standing outside of the bar when the mom said to me "just cause you met me now doesn't mean you can start calling me too" does it get any better than that? I love quick witted older women. Both of them made my night. What a great job I have!

For everyone in OKC and surrounding areas, we'll be back at Baker's for St Patty's day and possibly the Sunday night before so come out and see us. It should be a major blow out!!

Thanks to everyone for a great week and I hope to see you all again soon!

Later,
Randy
Posted by Randy Holder at 12:39 AM No comments: